Paolo Scagliarini had been working in the bar industry for 20 years until one day his health was no longer on his side and he knew he had to make a change. The answer came in the form of pressing healthy fruits and vegetables.  So Paolo took a leap of faith and went from cocktails to juice!

I was so happy when I found this cute juice bar just right outside my apartment here in Bologna as I was really missing my fresh juice and something healthy that did not consist of bread for a quick meal.

I was lucky to meet the owner that day and went back to learn more about his venture into the juice world and his thoughts on health here in Italy. As you may know I am here with my latest project “Project Healthy in Italy”. Read more about it here

Cute juice bar in the heart of Bologna.

From Cocktails to Juice in Bologna.

Paolo had beeing working in the bar industry for 20 years and starting having health issues as the focus had been on serving alcohol and chips due to his job. After a while he decided he was ready for a different focus and started learning more about vegeterian, vegan and raw food.

He started noticing a change in both his attitude and his body when implementing this kind of food and juice to his diet. He also added a slow juicer to his existing bar selling more and more fresh juice.

1 1/2 ago he decided to take a leap of faith and to leave the traditional bar industry for good to open a juice bar called Nectare in Bologna. The juice bar also focuses on raw and vegan food.

Fresh menu with lots of vegetables

Paolo says, “There is more and more focus on a plant based diet here in Italy just like the rest of the world. The Italians also like something quick, easy and light for lunch so the vast majority of my clients are actually locals and not tourists.”

He also tells us that for the first time Italians are spending more money on fruits and vegetables than on meat, which is a very positive trend. And the focus on organic is also steadily growing.

I also asked Paolo to share his most popular juice recipe with us and it is a juice called Green Detox. It consists of fennel, apple, celery, spinach and ginger. A real green treat! You can watch us make the juice in the video below.

Oh, my goodness, I am almost afraid to post this recipe as I might get banned from the country (Italy)and not be let in when I arrive on Saturday! The Italians take their food traditions very seriously! (Read all about Project Healthy in Italy here and follow my quest.)

Ricotta cheese is a sweet, fresh cheese made from milk and is a typical Italian cheese used for both savoury and sweet dishes. My favorite being ravioli filled with ricotta cheese and ricotta, baked cheese cake. They are both to die for!

You can make a delicious dairy- free ricotta in your own kitchen!

My personal recommendation is to limit dairy as much as possible as it is a typical allergen, causes inflammation in the body and is acidic in the way it digests. Eating and drinking a lot of acidic forming foods is linked to diseases such as auto-immune illnesses. There is also more and more evidence that dairy may raise our risk of both prostate and breast cancer.

We also see a greater focus on eating vegan and plant based no matter what your dietary preferances are. I am personally not vegan, so the chances of me being able to stay away from all the temptation 100 % of the time when I am in Italy are slim! Ha, ha. So I would like to share this option with you just in case I post a dish using ricotta and you would like an alternativ.

Nuts make the most delicious “cheeses” when done right.

It is really amazing how many nut cheeses are out there and the complexity of them are simply amazing! After experimenting a lot in the kitchen this is my almond “ricotta cheese” recipe from my lastest book: Carina’s Healthy Kitchen.

Tip! Spread on crakers, eat with fruit, fill pasta, use in pasta dishes for added creaminess.

The Italians have a love affair with espresso, or what they just refer to as “coffee”.

I love this small, strong brew just as much as the Italians do, and have an espresso maker that makes the best espresso (and aroma) in my very own kitchen. You can see the actual maker in my photo below. 🙂

Coffee is a good source of antioxidants. And as long as you don’t overdue it, and hydrate as well, it is actually a healthy staple to add to your diet. Of course, without added sugar or cream…

Panna cotta on the other hand means “cooked cream” in Italian and is a classic Italian dessert from the region of Piedmont. You have probably made it before, or at least tasted it somewhere. It is basically just cream, sugar and gelatine.

My version however ( Italians, please don’t be mad at me!;))is a healthier  panna cotta and is made without dairy or refined sugar.  I also use antioxidant-rich raw cacao and brewed espresso for a flavour twist and for a nutrient boost. My panna cotta is actually vegan, healthy, and yes; tasty!

You get the best of Italian flavours and traditions, but with better building blocks for your body. Recipe below…

I serve my panna cotta with an orange and mint syrup and something crunchy on top like an almond brittle( fine chopped almonds, roasted with maple syrup and a touch of salt) or such. But you can easily serve it just as is.

For the panna cotta you will need( Makes 2 portions):

Fresh beets are one of the best vegetables you can juice- both taste wise and health wise. When it comes to taste, it is naturally sweet. Regarding the health benefits, it is known to be a natural blood pressure remedy due to the nitrates found in the raw juice. It may also be a performance enhancer, as it has shown to reduce the body’s rate at which it uses oxygen when exercising. This results in you tiring less easily. Get your beets on!

How to: Wash the produce, leaving the skin on as a lot of the nutrients are located directly beneath the skin. Press using a juice machine/slow juicer.

I love soup or stews this time of year and they are easy to make – all in one pot!

My red lentil soup (or stew) is really delicious, and filling, but still low calorie, fiber-rich and blood sugar friendly, making it good for your waistline as well.

Lentils are a great plant based protein and is blood sugar friendly.

How to: Finely chop the onion, carrots, celery, chili and garlic. Sautee in olive oil until soft. Add the crushed tomatoes, stock and lentils. Cook until tender adding more water if needed. Season to taste. The lentils need at least 30 min. to cook. You do not have to pre-soak them. Enjoy!

Tip! This soup/stew tastes really great the next day so you can make a large batch if you like. It is also great to freeze so you have a healthy meal ready in no time:)

Today I have another super-healthy, tasty and easy soup for you. This one is also vegan and loaded with antioxidants like vitamin C and lycopen, which is known for its cancer- fighting properties.

The roasting of the vegetables give the soup extra depth and flavour and it also basically makes it self so you can do other things before dinner time!

You can also make this soup in larger portions and freeze for later. It is also a great tomato sauce base for pastas and pizzas.

Oven roasting vegetables is an easy and healthy way to bring out more depth and flavour!

I love ice cream, but my body and health does not love diary… Therefore I had to develop a dairy- free, healthy and delicious alternative because who wants to live a life without ice cream?!

The store bought kind is also full of additives, colouring and things I really don’t want to put into my body, and especially when I know how easy and fun it is to make my own at home.

This recipe i vegan, easy to make as well as loaded with antioxidants when you use a high quality, raw cacao powder and add cacao nibs and walnuts.

Best results are achieved when using an ice cream machine, but of course you can make it using a freezer, a bowl and a fork to whip air into it about every 30 min.

Watch how I make my chocolate ice cream in my video. I speak Norwegian but it is subtitled in english:)

I love Italy and Italian food but I can only endure all the gluten and high glycemic carbohydrates for a few days before my body tells me to stop!

So when I get home from my travels I like to take all the great inspiration and food discoveries I’ve accumulated and try to adapt them to  healthier and more balanced versions.

My sweet potato gnocchi with olive oil, lemon and Maldon sea salt are one of my creations that I simply can’t get enough of! Sweet potatoes are less starchy than white potatoes and better for your blood sugar. They are also a great source of antioxidants and fiber, and they are naturally sweet.

Because they are more watery and contain less starch than white potatoes, substituting the recipe with sweet potatoes makes it harder to get a soft and fluffy gnocchi because you would have to add too much flour to get a normal texture.

Therefore I have used an untraditional method for making the gnocchi. The Italians may hate me for this, but trust me it works and is so easy! I use a piping bag to make the dumplings…

Here is the recipe and make sure you watch me make it in the video. I speak Norwegian but there are English subtitles! 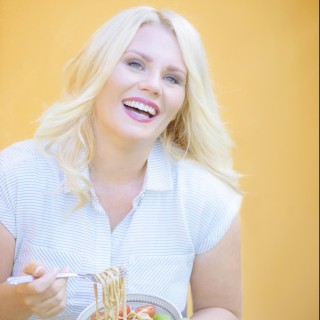 I am an Oslo based Norwegian author, blogger, nutritionist, juice therapist, personal trainer and plant based chef. Right now I am really excited about my latest project "Project Healthy in Italy" which you can follow live here on my blog from June 9. - July 6.!

This is Project Healthy in Italy